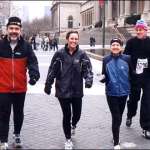 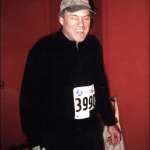 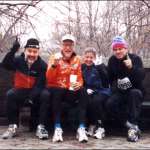 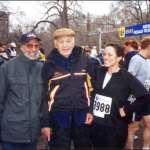 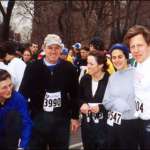 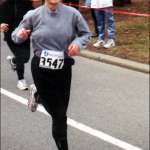 01 Wanderers on the march in New York City. Duncan MacGuigan, Wet Hen, Michelle Tulino and Sam Campbell say: BRING IT ON before the Al Gordon 15K.
02 The Al Gordon 15K marked the first return to competition for running legend Sam Campbell. Although Campy later was labelled as MIA out on the course, his performance was good enough to earn a spot on the Wanderers Team entered in the Cabot Trail Relay.
03 The Wanderers are Number One! Confidence was running high prior to the Al Gordon 15K. From left, Duncan MacGuigan, Rock Steady, Michele Tulino, and Sam Campbell. Note Rock Steady’s healthy dose of Latte prior to the race.
04 N.Y. Road Runners President Alan Steinfeld and Sally Gordon confer with Wanderers’ coach Al Gordon prior to the run.
05 Wanderers at the starting line for the Al Gordon 15K on February 16. From left, Beast of Burden, Sam Campbell, Wet Hen, Janet and Scott Quitel.
06 Janet Quitel puts on an impressive finishing kick to finish in 1:26:06.