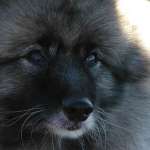 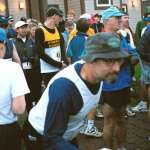 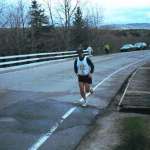 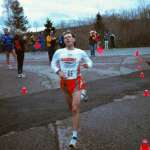 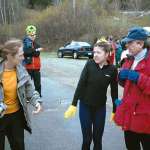 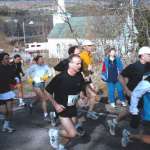 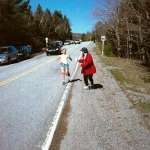 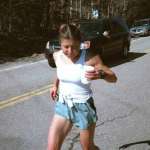 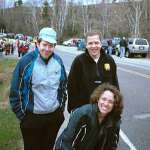 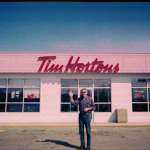 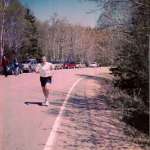 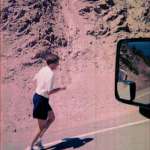 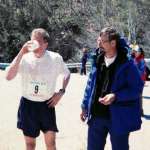 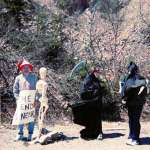 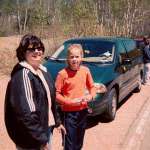 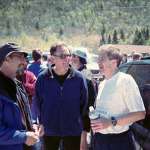 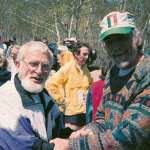 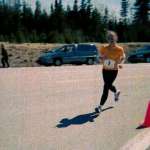 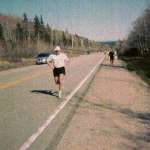 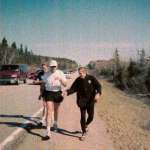 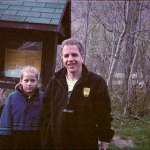 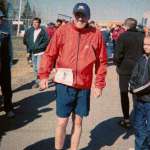 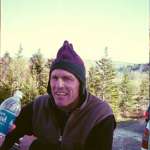 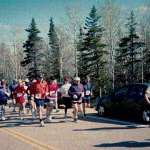 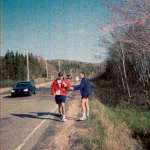 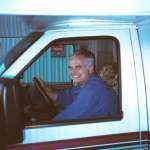 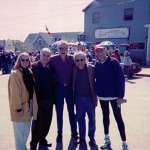 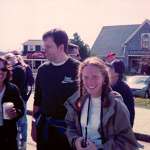 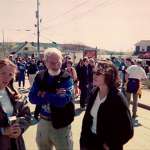 00 Renee has a dog named Koukla.
01 Space Ghost awaits the starting gun for the race.
02 Space Ghost labors alone in inclement weather conditions on Leg One without a Wanderer support technician in sight.
03 This was the type of competition the Wanderers were up against. Wayne Reilly of the Horror Hill Hurriers, who won the first leg. It’s not fair!
04 Renee, Michelle and Duncan await Space Ghost’s arrival at the end of Leg One
05 Michele is fast out of the blocks as Leg Two starts. She is the one with the nifty yellow gloves.
06 By Leg Two, support glitches had been worked out. Duncan MacGuigan executes a class hand-off of water to Michele Tulino halfway through the leg.
07 Michele fuels up during the second leg. She cranked out a 7:26 per mile pace on the hilly leg.
08 Pieman, Wayne Hamilton and Wet Hen were all smiles about the early results in the race. Faces grew grimmer later as the Wanderers went into the tank.
09 The Wanderers’ home away from home, Timmy Horton’s doughnut shop. Rock Steady is about to step in for a training meal.
10 Wayne was flying on Leg Four.
11 Wayne is really suffering now on the upper reaches of Mt. Smokey.
12 Wayne pauses and takes advice from Space Ghost before his final assault on Smokey.
13 The welcoming committee for Wayne on top of Mt. Smokey.
14 Did Wayne survive Mt. Smokey? That’s what is on the minds of Kiera and Shannong Hamilton as they wait at the finish line of Leg Four.
15 Wayne recounts tales from Mt. Smokey to Phil Roach, far left, Space Ghost and Tony Armson after putting the team in 30th place after Leg Four. It was all downhill from there for the Wanderers.
16 For a while, the Wanderers were leading hated rivals the Georgetown Runners. Rock Steady receives some premature congratulations from Irish Joe of the Georgetown team.
18 Renee rounds the turn and heads for home.
19 Tony is cooking on all cylinders on Leg Six.
20 Tony had to battle savages winds on Leg Six, but he got help along the way from Wayne. Despite the tough conditions, Tony finished the 17.5 kilometer course in one hour and 23 minutes
21 Wayne and Shannon Hamilton performed magnificently on the Cabot Trail.
22 Campy looks ready for Leg Seven. Shannon Hamilton, right, looks a little more skeptical.
23 Campy came prepared for the cold temperatures and biting winds.
24 It’s great to see Campy back in action again. That’s him in the orange jacketÖat the front of the pack naturally.
25 Tony Armson does it all, running a strong Sixth Leg, and then turning around to support Sam Campbell in Leg Seven.
27 David was a real pro behind the wheel of the RV.
28 It’s over! Granted the Georgetown Runners got away from us again. But it is time to celebrate after the Cabot Trail Relay. Pat Poteat, David Moltke Hansen, Rock Steady, Duncan and Tony declare, We will get them next time!
29 Wet Hen, Pieman and Renee of the Cape obviously up to no good after the cabot trail Relay. Rock Steady, beware of the Ides of March!!
30 Renee and the Hen discuss jumping ship to the Georgetown Runners with rival impresario Irish Joe. The big selling point was the stylish Georgetown running jackets. The pair were also considering an offer from the Cape Breton Liberation Army, which finished 34th.