Double-Wit? Wanderers Pull Off Double Victory at Half-Wit Half

Double-Wit? Wanderers Pull Off Double Victory at Half-Wit Half

PHOTOS ADDED 8/22 – The Wanderers may have sent a smaller contingent to this year’s Half-Wit Half, with only one of last year’s six award winners returning, but they still managed to pull of an impressive double victory, with Helen Cheung and Chris Verry blowing away the competition and bringing home two of the most prestigious prizes in the Pretzel City universe.

Domination from the Git-Go

Helen led the women’s race from the first mile on. After last year’s third place finish, Helen took control of this race and never let go. Despite all of the obstacles that the course was meant to have, and those that it wasn’t meant to have but wound up having because someone stole the trail markers, Helen still wound up winning the women’s division by a whopping seven minutes. This was a new course record, and would certainly have been a course record anyway, had this not been a new course. It was, in any case, four minutes faster than her time last year. Helen is now two for two in trail half-marathons this year. She also put in a solid effort in the best-Wanderer-scars competition, with her “shotgun” approach, returning from the race with both legs, both arms, and even her tummy scratched up.

Various Other Folks, None of Whom Brought a Digital Camera

Among the other Wanderers who completed, Tammy Leigh Dement, Cee Heard, Beth Auman, Brian McKenna, Matt Mauren, Noah Shusterman, Jim Millar and Erik Johnson all conquered this years new and “improved” (read: harder, and with more stolen trail markers) course. Matt entered a particularly good “rifle” entry to the scar competition, with one seriously scraped up calf. Not to be outdone, Cee showed up with a big ‘ol gauze bandage wrapped around her left knee. For the rest, the scars were all psychological.

When the Cat is Away

Polly Jansen, who finished last year third in her age group, was traveling and missed this year’s race. General consensus among the Wanderers there was that her absence led to the Wanderers most prestigious win in recent history: Chris Verry, revved up by tackling high school boys the day before, or perhaps trying to drown the memory, stopped at the bar that the race sets up at miles 9 and 12. There, he managed to destroy the competition, including a guy who’s won 6 of the last 7 half-wits and probably outweighs Chris by 50 pounds; by the three-hour drinking cut-off Chris had outdrank him 29 beers to 23. And then ran another mile. Impressive. What more can you say? Kudos to Matt for driving him home. 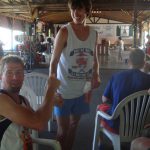 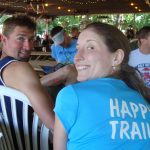 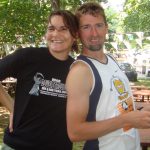 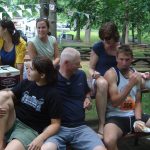 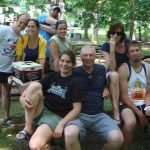