On June 13, 2010, Chris Verry, Polly Jansen, and Sharon Schmidt-Mongrain set out to tackle Eagleman Ironman 70.3 in Cambridge, MD.  One might think, with the bike and run courses being pancake-flat, that the race would be, well, less-challenging.

However, with a swim that clocked up to 0.3 miles too long, a headwind for the vast majority of the bike loop (how that’s really even possible I’m not sure, but ask any racer and I think they’d concur), no shade, and temperatures well into the 90’s (without even factoring in the humidity), the race was a certain challenge.

I think we were all a bit surprised to arrive race morning and hear that the water temps were warm enough to disallow wetsuits.  I think this bummed Chris out the most.  But we all knew that since he normally trains without his wetsuit, he’d make it.  We’d all driven the bike-course the day before to preview what we were in for.  What we found out – we were in for a very boring 56 mile ride!  There was absolutely nothing to look at, or look forward to (except for re-entering Transition), throughout the whole ride.  Chris said his plan was to focus on getting to each bridge; he counted 5 when out driving the course.  Thinking it would bring some kind of joy or good thoughts, I tried to pretend that some of the marsh/ponds areas I saw were really the Caribbean Ocean.  For some reason though, I just couldn’t transform the brown marshy water and weeds into crystal-clear blue waters and palm trees!

And the course didn’t get any more interesting on the run.  Like the bike, it was flat with nothing to look at or focus on.  But what made the out-and-back course even tougher was looking at other racers on the second-half of the course with envy, and realizing that however hot and/or tired we were, we still had to make it to the turn-around before we began our 6.6 mile journey to the finish line.

We all made it across the finish line and Polly and Sharon have the peeling sunburns and number-tattooed arms to show how long and hard of a day it was.  I’m happy to report that Polly still had a bit of sanity (although some may dispute that term) left in her during those last 3 miles and decided that the allure of the Finish Line, Finisher’s Medal, and post-race food spread was a better option than the partying college kids with their bean-bag games and beers!

Chris apparently didn’t think the day was too taxing.  Less than 48 hours later

[I was still nursing tired muscles], he boarded a plane bound for China on a “school trip” although there were no students!  We all appreciated the cheering and words of encouragement provided by our world-champion spectator, Christian Mongrain.  Thank you Christian! 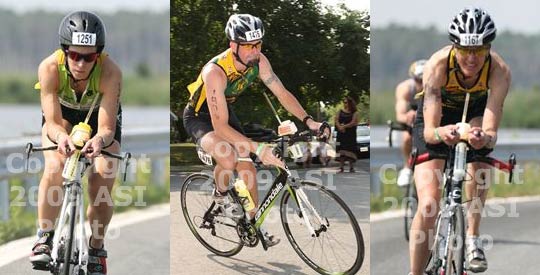 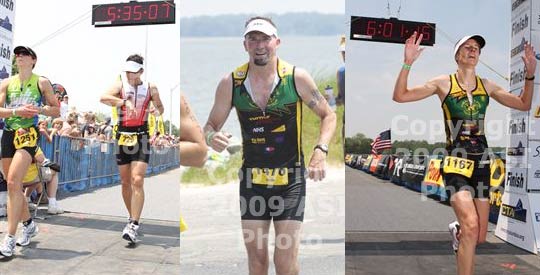