Sunday, November 30th was downright ugly !  However, since when do temps in the 30’s, fierce winds and pouring rain deter the Wissahickon Wanderers from a challenge?!!  Yeah, all you whiny-mcwimpy-slackers who stayed in bed that morning (and you KNOW who you are), we’re talking to you!!

Yet a brave group of gritty (and muddy) runners would not be swayed by the elements (other than blown by wind and felled by mud) and were steadfast in their quest to burn off those extra helpings of stuffing, gravy and pumpkin pie.  Though their shoes risked being sucked off by mud and their ankles twisted by camouflaging leaves and slippery rocks, they emerged victorious on that bleak November day in French Creek Park.  Though we’ve been told that Ron Horn’s printer took on water (thus the finishing times became more difficult to read on down the line!), here are the celebrated warriors and their “estimated” times:

Doug “Trail Kamikaze” Dubrosky thought it might be fun to run trails in the daylight for a change & finished leader of the pack in 1:17:40.  Erik Johnson was hot on his heels finishing strong in 1:18:29.  He and Anita Zalewski, who finished great in 2:01:39 managed to make it to the start of the race by the skin of their teeth . . . again!  Erik’s sister, Maurisa Johnson was along for the fun (this being her first race!) and managed to finish with a big smile on her face in 1:41:22.  Erik, we hope you at least bought lunch!

Not surprising was the presence of the “Extreme Team” of Josh Dennis and Tim Ellis who were fresh off their ‘fresh’ dip in the Wissahickon on Thanksgiving morning.  They finished respectively in 1:20:45 and 1:38:02 (brain cells still in question!).  Noah Anstraus came in at 1:34:25 and proved that he possesses the heart of a true Wanderer by giving the weather the finger (“I’m from Minnesota, fool!”) & trapsing around in flip-flops before and after the race!  Chris Verry was the vigilant scout who was able to guide Josh around that tricky turn that Polly messed up on last year and Doug the year before (no Wanderer left behind this time!).  He finished in a respectable 1:21:11.

Polly Jansen, grateful for her new-found ability to read arrows, finished 1st in her age group in 1:27:37.  Dennis “Hardcore” Crowne, always a force to be reckoned with in extreme conditions finished fantastically in 2:19:08.  Props, kudos and special thanks go to Beth “Wandering Pagoda” Auman who put all comfort aside and volunteered at the race.  Beth, you are awesome & it was great seeing you out on the course!

Though the hot soup ran low and the runners were soaked to the bone, all in all they felt great knowing they triumphed over adversity at another crazy event.  Great job Wanderers!!! 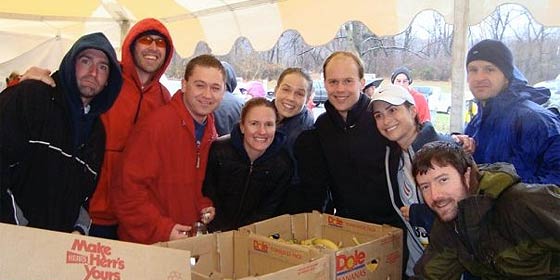