The Athlete of the Month Award for November has been delayed because of the Christmas and New Years holidays.

But the decision on the winner was unanimous… Mountainman Millar (middle) for his performance in the Thanksgiving Day Dip and Run.

The workout, as proposed by organizer Josh Dennis, was to consist of a two hour run in the Wissahickon with numerous creek crossings and optional dips.

Mountainman’s performance in the running portion of the workout might have been a little dubious. But in the aquatic portion, he was stellar with several graceful dives off Devil’s Rock and then a few laps around Devil’s Pool.

It was definitely an Athlete of the Month performance.

Photo below: Mountainman (Jim) Miller (right) after receiving the award during the Wanderers’ Annual Meeting on January 21st. Also shown are the 2008 Athlete of the Year Jimbo (left), Fred Kenney (back), and Rich Greifer (front). 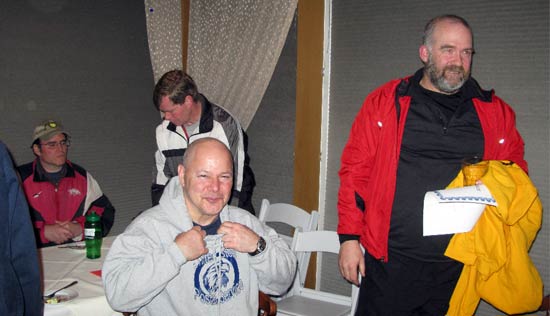