Report by Phil Ranly – For 7 years, I have talked about the 4-corners run. The run traverses all corners of the Wissahickon park.

For trail masters Bob Reynolds, Louis Secreto, and Chris Moore, this run is a staple of their training regime. For other trail warriors, such as Noah Shusternman, Pete Michener, and Helen Cheung, the 4 corner feat has long been accomplished.

This year, I vowed to complete the run at the January club meeting. At the club meeting each January, a certificate is given away to those that complete the run for the first time. This is a accomplishment that is recognized by the club as a high honor. It represents a level of trail running mastery and a level of commitment to the Wissachikon and the Club. At the January meeting I vowed to complete it (It was my fist bump for the year, our form of a promise). I was actually a bit embarrassed that I hadn’t completed the run. For years, I have been asked by Chris, Bob and others to run it. And for years I found an excuse – house work, chores, work trips, too hot, too cold… all the common ones. This year appeared to be the same set of excuses. Spring came and went and I hadn’t joined in on the run. Summer was hot and I was traveling some for work and putting my house together. Fall was nice, but I was busy. Finally, a time came when it felt just right: December 17, 2011.

On this pleasantly cold Saturday December morning, Jeff Hayes and I joined 4 corner masters Bob, Chris, Louis and Noah (Pete, Brian, and Helen paced us for the first two corners). The encouragement from the other Wanders was contagious. Without the group, it would have been difficult. The night before I actually had restless sleep, resembling pre-race jitters you get before a big race or your first marathon. I was nervous about my conditioning for good reason. Prior to this run, I maybe had a couple 10 mile runs this year, but nothing approaching 20!

In the end, the run was everything I hoped it would be. The pain was just right. It was the type of pain that nags at you each step, but all excitement of the moment trumps the pain. Looking at the GPS map of the route: connect.garmin.com/activity/134958209 I was amazed how well this run actually touches every corner of the park. I now feel I conquered the Wissachikon. I feel like a Wanderer! I won’t get overly ‘sappy’ on this post, but I will say it was an accomplishment…. And most important I want to THANK the entire Wanderer Club for the years of support. We look out for each other, encourage each other, and we reach new milestones. For me, it was this Saturday traning run called the 4 corners, for others such as Chris and Bob it is 50K, 50 milers they finished and will complete – Bob shooting for a 50k age group record. For Loius, it is the races and age group awards he’ll collect. Noah and Helen continuing trekking while raising Zonker. Jeff Hayes planning on a trail ultradistance. We each have our goals, and as a club we help make them happen.

After the run, we ate Chocolate Praline Cake from the Night Kitchen Bakery (another motivation for me to reach the finish – we all need motivations!), See the photo taken by Chris Moore below. 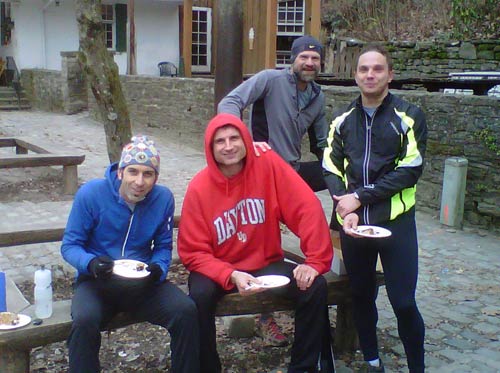