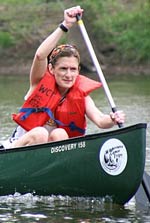 The winners of Athlete of the Month for April , Susan “The Great One” Hurrey and Pamela MacElree, really should qualify for Ripley’s Believe It Or Not. Their improbable athletic achievements started with a challenge this winter. Pamela , who is a manager of the CrossFit Philly gym, challenged The Great One to perform five chin-ups . The fitness test was scheduled for April 15. Susan countered by saying that if she proved successful, Pamela would have to complete the Broad Street Run.

Anyone who has seen The Great One try to do a chin up knows that completing five of them for Susan would be Mission Impossible. Whether it was some secret high intensity training or a quick trip to the drug store for some muscle supplements, Susan somehow nailed the five chin-ups in her April 15 fitness test.

Of course, Pamela like everyone else figured that The Great One would fail the chin-up test and had made no effort to train for the Broad Street Run. Considering that Pamela does no running, she had three weeks to prepare for Broad Street starting from scratch. Her first move was to buy a pair of running shoes. But by race day on May 4, Coach Pam was ready. She completed the race in an honorable 1:51:51.

For these two achievements, Coach Pam and the Great One have been named co-athletes of the month for April. This is the second time Susan has received this prestigious award, and it is a first for Pamela.