The Bull Takes No Prisoners

The Bull Takes No Prisoners

April 18, 2009 marked the 17th running the Bull Run Run 50 Mile Trail Race. The 50 mile course is run on the Bull Run trail and consists of a double out and back with a loop (The Do Loop) on the end of the second out and back.

With the exception of a road crossing and the three quarters of a mile sprint at the start and finish, the entire course is on single-track trail. Hills are scattered throughout the trail with the majority strategically placed at the end. I knew that I signed up for this race for a reason!

My initial registration for the race included the Friday evening pasta meal along with a bunk in the bunk house. My plan was to carpool to Virginia with two other runners/friends/teammates (Frank Gousman, Jr. and A.J. Johnson) early Friday afternoon so that I could get settled, pick up my number, overindulge at the pasta dinner, and get a good night sleep. Unfortunately, it doesn’t work that way when you are married and have young children (which I do). In the end, I left solo for Virginia late Friday night and slept in my truck in the parking lot. I never did make it to the briefing although I was forewarned that the “Do Loop” was going to be a lot of fun as the race started!  I would have it no other way…

The adventure began promptly at 6:30 a.m. with a field of 314 runners. Temperatures felt to be in the low 50’s at the start but that only lasted so long. As the difficulty level of the terrain increased, so did the temperatures. Although the official temperature only reached 79 degrees, it felt much hotter. There really was no cover from the direct sun the entire race which seemed to magnify fatigue as it inevitably set in.

For the majority of the race I felt great. I felt so good that “out or respect” I even banged out a few pushups for the photographer at the 30 mile mark and intentionally jumped in the residual mud puddles along the trail. For whatever reason, I am so drawn to the lure of the outdoors that at times I forget I am even in a race. Perhaps what I needed was a wakeup call and that is what I would get soon enough…

There is a saying in the ultra community that I have grown to love for good reason. The saying is this: “If you feel good during an ultra, don’t worry, you’ll get over it.” At about mile 39 I was over the “feeling good” aspect of the run. My recollection is that between miles 31-39 I passed several runners that were puking and several that were simply hunched over with fatigue. I don’t recall at what mile I entered the infamous “Do Loop” but coming out of it I was beginning to cramp really bad which meant only one thing to me, I would have to sit down and rest for a few minutes, NOT! This only meant that I would be uncomfortable while running or doing the ultra shuffle the rest of the way and no more pushups, well, maybe no more pushups!

I crossed the finish at 8:55:40 which was good for 47th place out of 314 starters (265 official finishers) proudly representing both the Wissahickon Wanderers and The Animal Camp. So what does that make me, a Wandering Animal? Considering I am back from a broken foot for 1 month now I can’t complain with my time which doesn’t matter that much anyway. To me the spirit of the run is less about the finish time and more about the adventure, friendship, and personal challenge.

Finally, my story would be incomplete if I neglected to mention one of the greatest highlights of day and that was seeing teammates A.J. and Frank cross the finish! Shortly thereafter, Frank “the Tank” took his finishers award, had a picture taken, then crawled behind the truck where he remained puking for 90 minutes with not one complaint, not before, not during, and not after the run. If that isn’t bad ass, I don’t know what is!! 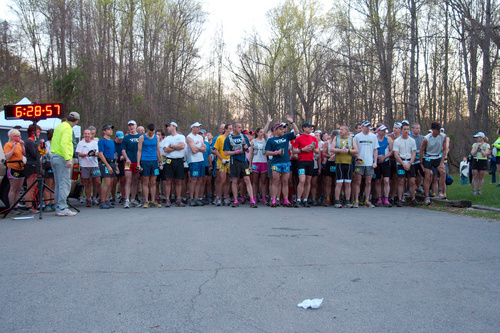 The start of the race. 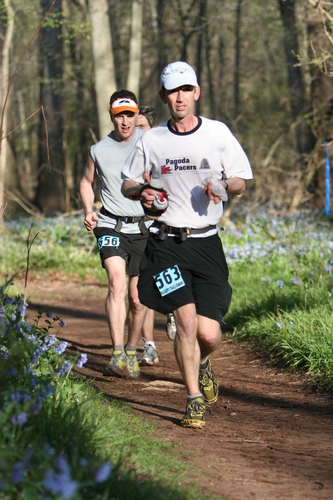 Johs chasing the runner in front of him. 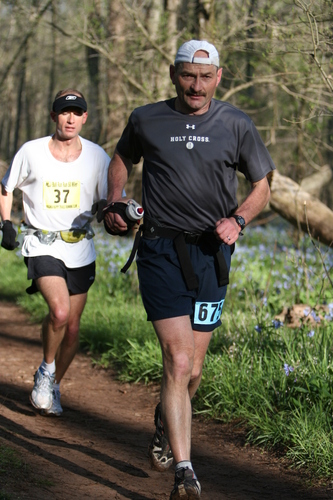 Frank keep trucking about 1/2 way through the race. 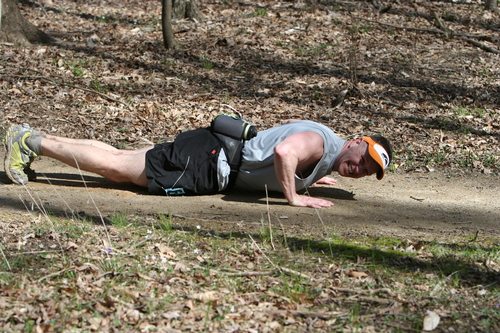 Josh working on some extra credit. 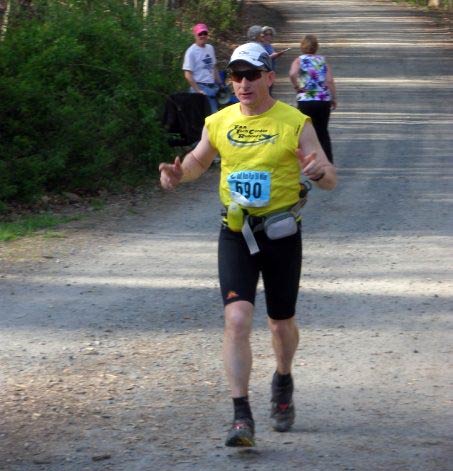 Another South Jersey running buddy A. J. Johnson tries to give the
thumbs up at the finish line.  But nothing comes easy after 50 miles. 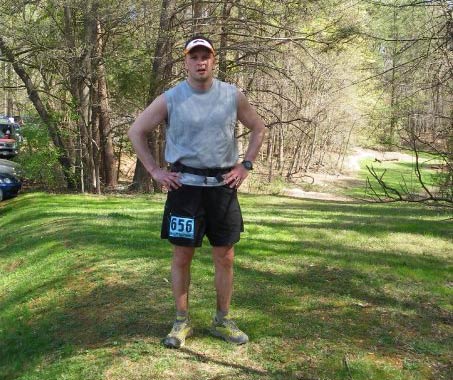 No sweat for Josh after the race!