“This was the most miserable thing I’ve ever done in my life!” said Noah AnStraus after finishing the Chilly Cheeks 7.2 mile Trail Race on January 25th in Reading.

A bewildered-looking Noah did manage to crack his winning smile while recalling tales of woe with fellow Wanderers over pitchers of beer at the Liederkrantz after the carnage was through.

An aptly “chilly” day greeted the 462 racers with temps in the 20’s and a light coating of crunchy snow (which actually helped to pad the rocky trails a bit).  Seemingly never-ending uphills and downhills challenged the fearless Wanderers, including the infamous “Whadafug Hill” and a hands-and-feet climb up “Mount Mud” at the end.

Despite his lamenting over the hills and rocks, Noah managed to finish the race strong in 1:18:30.  Cee Heard, who had run 4 hours the day before preparing for the upcoming Old Pueblo Ultra in March, came through unscathed in 1:28:49.  Not surprisingly, Cee described the race as “superfun!”  She also appreciated the extra hour of sleep, courtesy of the 11am start time.

Polly Jansen snagged a 3rd in her age group award with a time of 1:11:56, receiving a trophy with a creepy “horror movie” baby on top!  Polly managed to take a few people on Mt. Mud with the help of Chris’ booming voice in her ear!  Chris Verry bypassed the beer stop on this one and finished in an impressive 28th place with a time of 1:04:26.

Besides, there was brew a-plenty at race’s end accompanied by some hearty scrambled eggs and pancakes.  The breakfast of champions!!

“Wandering Pagoda,” Beth Auman’s presence was missed at the Chilly Cheeks, but she had her own trails to conquer.  Beth competed in the Mountain Mist 50k in Huntsville, AL on January 24th with several of the Pagoda Pacers.  As usual, Beth turned out an amazing performance finishing 5th in the females under 40 category in 6:14:28!  Way to go, Beth!! 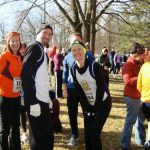 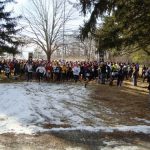 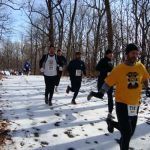 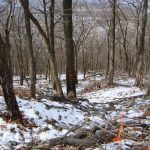