Wanderers Kick off Triathlon Season in Back to Back Races

Wanderers Kick off Triathlon Season in Back to Back Races

During back-to-back weekends late in May, several Wanderers kicked off the Triathlon season in two separate events.

Thank you Polly for compiling these great reports !

Got the Nerve Sprint

On Saturday, May 23rd, Sharon Schmidt-Mongrain, Christian Mongrain, Chris Verry, Matt Mauren and Polly Jansen descended upon Mt. Gretna, PA to participate in the 6th annual “Got the Nerve” Sprint Triathlon.  The race consisted of a 500-yd. swim, 16-mile bike and 5k run.  All agreed that this was a great race to start off the tri season.

Christian definitely had the intimidation factor going with “I love elementary backstroke” boldly scrawled in black marker on his swim cap.  All were in fear!  Chris & Matt seemed to be holding hands during the race, as they were in sync during the swim and together in and out of both transitions!  Is it true that after training with someone for long enough, you start to look like each other?  Well, maybe race like each other?

Matt definitely plowed through the course like a champ & took 3rd place Clydesdale honors!  Polly had to make a chain adjustment on the bike portion, which along with Chris being done with the run before she started motivated her to blast out a 6:15 pace during the 5k.  The angry running was enough to earn her 2nd in her age group.  Sharon completed a stellar 3-peat win of this race, blowing away her competition and also capturing the fastest female bike and run times!  She has rightfully been dubbed “The Intimidator!”

Regardless of which distance you complete, Black Bear is definitely not for the faint-of-heart.  On Sunday, May 31st, Noah AnStraus, Sharon Schmidt-Mongrain, Matt Mauren, Polly Jansen and Chris Verry dared the Bear!

Noah and Sharon participated in the Sprint race, which consisted of a 750-meter swim, 18-mile bike and 5k run.  Pre-race logistics were a bit…messy.  Perhaps some preparation on parking cars for the 1,000 or so participants…plus relays…plus family members/spectators would’ve helped!  Everyone was in a rush to get their station set up in transition before the start, which thankfully they delayed.  “I was a mental mess!” said Sharon who was happy to have made the start of her swim wave.

Once the rest of us got to the lake, Noah was already in the water!  Sharon got a chuckle when she saw a guy with his wetsuit on backwards.  “I at least felt better that I knew how to put my wetsuit on!”  Lake temp was a cool 68, enough to numb the feet throughout the bike ride, according to Sharon!  Brrrr…thank goodness for wetsuits!

Sharon, Matt, Chris & Polly appreciated having biked the course with Christian prior to the race to prepare for the hills.  Noah, however had a different “strategy.”  Three days prior to the race, he casually mentioned that perhaps he should ride his bike outside prior to the race!  Fortunately he had done the race last year, so he knew what he was getting into.  One suggestion Noah, we know you’ve been used to biking indoors, but make sure you have your helmet before trying to leave transition!  We hear the race officials don’t really tolerate that!  Post-race, Noah determined, “Apparently bike trainers are not a substitute for the real thing.”  Noah hammered it out though & finished strong with a time of 1:57:10, ten minutes faster than last year’s time!  Sharon continued on her winning streak & broke the tape taking 1st overall female with a finishing time of 1:29:59!!  Way to go, Sharon!!! “Intimidator,” indeed!!

Matt, Chris and Polly took on the Half-Ironman distance.  The race consisted of a 1.2-mile swim, 56-mile bike and 13.1-mile run.  And what a course it was!!  Relentless!  Hills were dubbed, “the out-and-back mile-and-a-half from hell,” “Lovett-Hate It hill,” and aptly named by Matt, “Donkey-punch hill.”  Chris had so much mud caked in his bike cleat after running up from transition that he had to stop & dig it out with a stick!  Other than having to stop to retrieve his bike clock which had flown off, he said the ride went o.k. (other than feeling like his legs had been beaten with rods).  Polly got caught in a passing shower, which was not rain.  The guy in front of her on the bike decided that it would be a good time to relieve himself while riding downhill!  Isn’t there some quote about NOT pissing into the wind?!

The run portion of the race was a grueling 2-looper in which you had to pass by the finish line 5 times prior to crossing it!  At least there was some variety, with a trail section through the woods (aaah, shade!) and some running on grass.  The out-and-back damn dam was the mental challenge!  Spectators and volunteers were great, with one family handing out gummy bears (how cute!) and volunteers handing out cold towels (so nice!).  A HUGE thank-you to Alex & Lisa who were stationed near the finish line cheering us on all 5 times!  Awesome!  Polly crossed the line in 5:47:39 taking 2nd in her age group & fastest female runner.  Chris and Matt knocked out a 6:01:20 and 7:08:41 respectively.  Congrats to Matt for finishing his 3rd Half-Ironman!  You rock, buddy!!  Despite moments of delirium, nausea and fatigue, the Wanderers prevailed against another killer event!!  Hooray for us!  Special thanks to Gabe, Christian & Judy for their support and cheerleading at the race!  You guys are THE BEST!!!

Got the Nerve Triathlon – Race Photos: 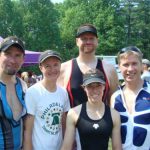 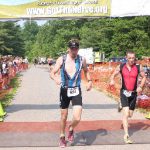 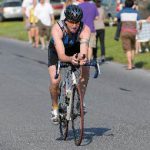 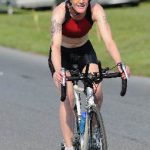 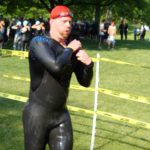 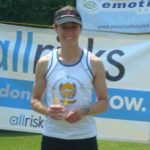 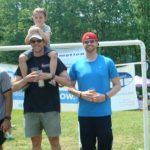 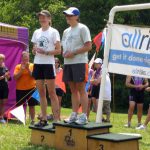 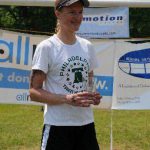 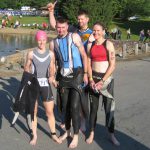 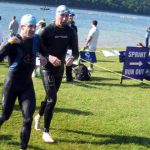 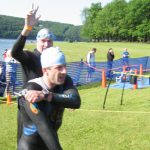 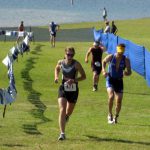 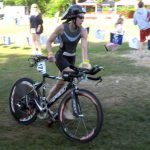 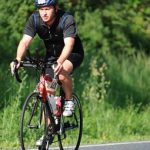 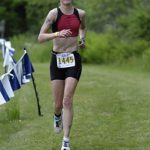 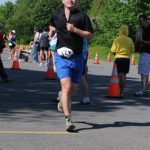 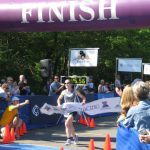 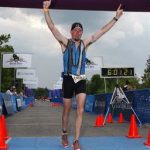 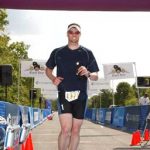 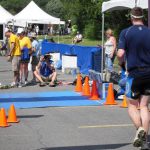 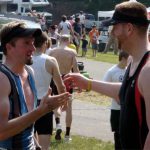 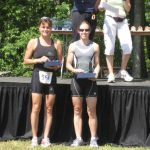