Fortunately, the tropical storm that hit the area the day before cleared away leaving sunny, blue skies with temps reaching the 80’s.  Sharon Schmidt-Mongrain, building on her training for the 70.3 World Championship in Clearwater this November took on the Sprint Distance while Chris Verry, Matt Mauren and Polly Jansen tackled the Half.  The Half-Ironman was not without it’s pre-race drama as participants were informed less than a week before the race that the bike course would be cut by 17 miles due to some unfinished bridge construction.  Apparently the race director received enough angry e-mails, however to alter the course by race day so that it would indeed include a full 56 miles for the bike course.  Phew!

The race course was certainly a mentally and physically challenging endeavor right from the start.  The swim start was actually a few hundred yards out from shore, so participants had to swim out & tread water as they waited for the inaudible blowing of the whistle.  As with many swims, it was mass chaos and carnage.  Sharon was adjusting her goggles at the start, then got kicked in the face & had to adjust them again!  On the way back to shore, racers had to contend with the sun in their eyes the whole way back.  Chris got redirected a couple times by a volunteer in a kayak while trying to make his own path back to shore!

After the swim it was a quarter mile run up to the transition area and on to the bike.  Sharon cruised by the other Wanderers with a shout-out to keep up the good work.  The race director was a little sadistic with the choice of where to repeat the Half course to make it a full 56, i.e. up and over a “bridge of death” four times!  This was by far the most treacherous part of the course with some bumpy metal grating to contend with.  Matt’s tire blew on the last cross-over, but luckily a super-sweet fellow racer stopped to help him change it, allowing him to continue.

On to the run, which was hot, flat & unshaded!  Sharon sped through her two miles around the campground in a breakneck 5:53 mile pace!  This helped carry her to 3rd overall female honors with a time of 1:19:43.  The Half course was an out-and-back jaunt along the scenic C & D Canal.  Fortunately there were aid stations at just about every mile and they were definitely needed as the day heated up.  As the Wanderers approached the finish line, it was a glorious feeling knowing they had finally made it through this grueling event!!  Chris finished fantastically in an overall time of 5:18:21.  Matt who competed in a Half Ironman a few years ago annihilated his time by about an hour-and-a-half finishing in 6:27:54.  Polly nailed first in her age group with a time of 5:25:27.  Chris & Polly want to extend a special “thanks” to Matt for getting them off the couch many a time to go out & do those long brick workouts (bike ride & run).  Matt is truly a motivator and an encourager.  Thanks for kicking our butts into shape and helping us all conquer the Half-Iron!! 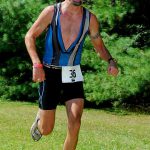 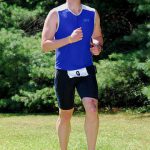 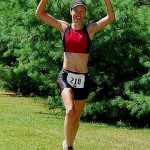 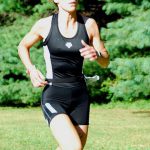