For me, the week leading up to the marathon is always stressful. This year featured worry over my choice of race shoes, a lack of confidence in a new training program, and concern over some nagging injuries.

Though the nerves never go away, it is almost a relief to step off the bus in Hopkinton as there is no turning back once you’re standing in the start corral.

To meet my time goal, I had to hit the ten mile splits at an hour each and then try to hang on for a sub forty minute 10K. Early in the race my legs felt fatigued and my confidence was shaken. Despite this, I was able to maintain a steady pace and hit the ten mile mark under my goal split. I struggled in the Newton hills and didn’t feel good about my chances of setting a PR until I hit the 20 mile mark on Heartbreak hill. For the first time all day, I realized I had a legitimate chance of breaking 2:40. By the time I hit Kenmore Square (one mile to go) I was running on fumes, but knew where I was on the clock which helped me stay focused. Approaching the finish line I had little left to push with, but gave one last burst in the last ten meters seeing the clock close in on 2:36. At 2:35:47 my tenth consecutive Boston Marathon came to a close.

After the finish, I had a massive calf cramp that required several volunteers to prop me up. I still managed to make it to the post-race massage (where I cramped once again) before meeting up with Leslie who turned in a solid performance in the BAA 5K the day before, my parents, Leo, Pete, and their families.

Pete and Leo both nearly broke three hours in their first and second Boston Marathons respectively. It took me four trips to Boston before I ran as well as they had. They ran like true veterans on a course notorious for robbing good runners of fast times.

Boston Marathon 2011 Race Report: The excitement in the starting corrals was contagious.  I could feel the energy of the other runners around me and the crowd was already buzzing even though the race hadn’t even started.

I was not able to spot the elite runners from my spot in the second corral but there was an explosion of energy when they were announced!  Despite the fast downhill start I was boxed in for the first few miles, especially the first mile (I wouldn’t run that slow again until the last 3 miles).

I thought that I would be ready for the downhill start of the race simply because I knew about it.  Turns out that knowing about it, and experiencing it are two very different things.  The downhills and slowly building thunder in my quads would ultimately turn out to be the thing most responsible for me coming unhinged at the end of the race (although Matt and Leo have pointed to my lack of nutrition on the course as a factor).

With that being said, I’m extremely happy with how I ran.  Despite missing a sub 3 hour goal by 8 seconds (final time of 3 hours and 7 seconds), I ran the race at a very consistent pace.  I slowed down a bit for the Newton hills, but handled them pretty well.  It was heading back downhill after Heartbreak that presented the biggest problem.  Towards the end of the race my legs simply didn’t want to turn over anymore.  This issue briefly landed me in the medical tent after finishing.  However upon hearing that someone else in the tent was about to get a rectal thermometer, I decided it was time to get the hell out of there.

Although I hadn’t quite reached my goal, it was awe inspiring to hear about the performances that went down on the course that day.  World record or not, it’s an astonishing time.  Also, Ryan Hall ran an amazing race leading most of the way and laying the foundation for some very fast results.  Most impressive in my opinion was the performance of fellow Wanderer Matt.  Dropping 5 minutes, when you’re already as fast as Matt, is absolutely amazing!  Also, I think my ears are still ringing from the crowd at Wellsley.

Even more awesome than the running, was the support of Matt, Leo and all of our family members that came out to support us!  Although I didn’t see any of you on the course (even though Leslie was yelling at me from a few feet away in the finish area) your presence was a huge factor to keep me moving.

PS:  During the last 3 miles I was convinced that I would never run another marathon.  Since that time, I’ve been considering slight alterations to the training plan and making arrangements to run Boston again in 2012…

Boston Marathon 2011 Race Report: About 20 miles into the Boston Marathon, any trace of joy I normally associate with the sport of running was gone. In its place was misery.

I had hoped to run to an automatic entry for the New York City Marathon — a 2:55 — and was on pace for nearly three quarters of the race. What’s more important to note, though, is how easy it was coming to me. The miles ticked by effortlessly, nothing slower than an uphill 6:49, save for the crowded opening mile. I was focused, but relaxed. I soaked up the atmosphere in Wellesley and felt a boost of adrenaline when I turned the corner at the fire house in Newton. I figured I was golden.

But I hit Heartbreak Hill and fell apart.

I’m still not sure what is entirely to blame — maybe it was the downhills trashing my quads, maybe it was the heat, maybe I’m not as fast as I thought I was. None of it matters, really, because the final 10K, where I had hoped to be my strongest, was nothing but a lesson in how to suffer. My pace slowed by nearly a minute per mile and it took everything I had to focus on not slowing more.

Surprisingly, I’m OK with that.

If I learned nothing else from this marathon, I learned what so many people have told me — the marathon can be humbling.

Given the distance, more is likely to go wrong for you than go right. Success in the event, then, is not solely based on time. It is also based on how you respond when the day does not go as planned.

Looking at my race through that lens, a 3:00:12 — a six-and-a-half minute PR — is a success. And if I can remember the lesson I learned, I’ll be a better runner. 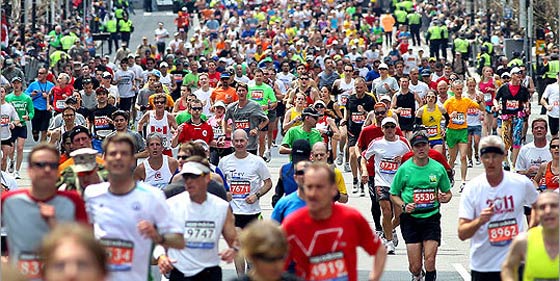