This past Sunday, Wanderers Erik Johnson and Susannah Grosso took on the 1st annual Rothrock Challenge, a just-added addition to the “Grand Slam” of Central PA trail events consisting of the Bald Eagle Megatransect, Hyner View Challenge, and the Dam Half/Full.

The 18.6 mile course – laid out by Lock Haven Shoes owner Craig Fleming and his wife, Jen – had runners dodging rocks and boulders, climbing up and down mountains over 5,000 feet in elevation, scurrying through streams and mud-laden puddles, and deftly maneuvering themselves through and out of the race’s signature hotspot, Shingleton Gap (a boulder field much smaller but more navigable than the Megatransect’s), all of which helped attest to the Flemings’ likening of Rothrock to the East Coast’s most challenging trail race, the Escarpment Trail.

Surviving this 30K was no easy feat. Tripping became, from very early on, an inseparable facet to the race. Every incline, decline and relatively “flat” surface in between was, not surprisingly, rocky (I mean there’s good reason why it’s called Rothrock State Forest!). Sprinkle in exhaustion,  hunger-induced fatigue and reported  bear sightings, survival thus took priority over the much more aggrandized notion of winning.

Coming into the finish line unscathed, however, was not guaranteed. Midway through the course, I took a bad fall on a rock cleverly hiding under a patch of nearly foot-high grass. Of course there was no other choice but to keep going, and I tried my best not to look down until mile 13 when I noticed that what I thought was just a mere scrape morphed into a huge swelling on the left side of my lower leg. What’s a trail race, after all, without a few awe-worthy cuts and bruises?

After making my way back onto the road to sustain the same .6 mile route the course started on, I was in bad shape. My leg hurt, I was dehydrated and, perhaps worst of all, I was hungry. A sensible person would have snacked along the way to restore lost electrolytes and vital nutrients, but I just couldn’t bear the thought of food and opted to keep on running/tripping till I headed towards the end and extracted just enough energy for a bright star jump at the finish line…or maybe it was witnessing The Great One hill repeating up and down the Tussey Mountain ski slope screaming “come on, slacker, get the lead out,” that propelled me towards the finish. Either way, I finished 13th overall (out of 77 female and 218 male participants) and 3rd female with a chip time of 3:43.

Erik Johnson, having arrived in State College only a mere 6 or 7 hours before the start of the race, did amazingly well given the circumstances (which included sleep deprivation and faulty trail shoes) and placed 27th with a time of 4:07.

Next on our agenda: the Escarpment Trail in late July pitted in the Upper Catskill mountains. 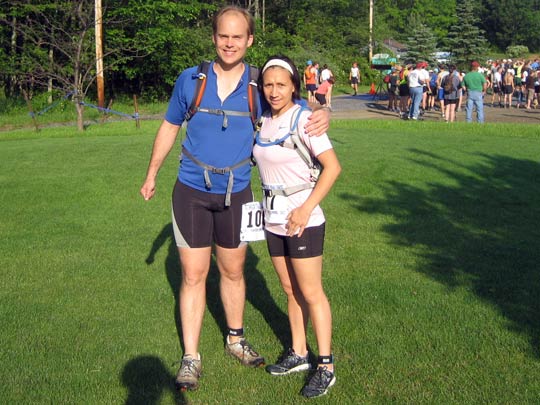 Erik and Susannah before the race. 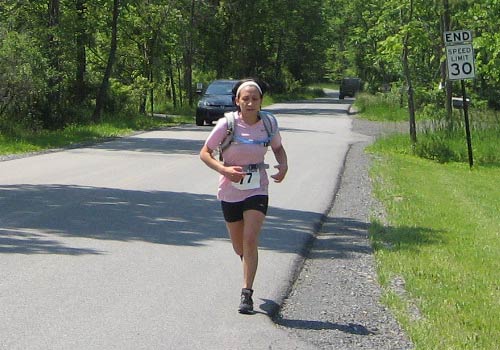 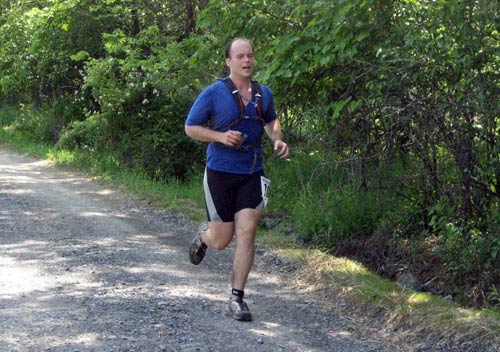 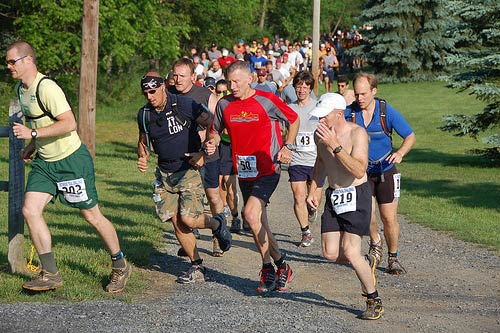 Erik in blue (on the right) early on. 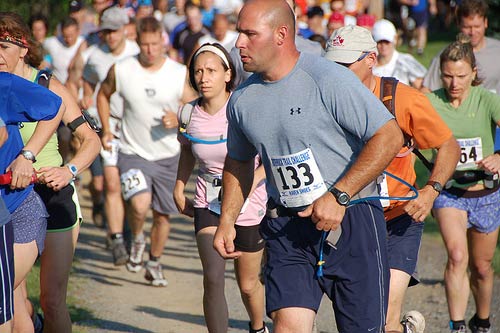