April 26, 2009 — The weekend of April 25th was like others in the recent past in that my wife had to work all weekend long.  I humorously reminded her that I am left with only one option of what to do in her absence, Party!  Now it’s easy to jump to conclusions and label such behavior but not until after you know what I mean…

It’s important now to mention that my wife and I have two young children, a two year old and a 6 month old which means that a weekend of work for her translates to a weekend of working for me.  With temperatures forecasted to be in the 90’s and most pools still closed, the easiest route was to stay inside with the AC on, watch cartoons, and play games…  Problem is, that’s not how we runners roll!

Earlier that week I was reading through my daily Pretzel City emails and came across something that really caught my eye, The Black Sheep 5K Run being held in Oaks, PA along the Perkiomen Trail.  The reason it caught my eye was because it is a 5K that requires running with one of three things: headphones, a dog on a leash, or a baby in a jogger.

I spent the evening late Saturday night packing everything from baby formula to the double seated jogger.  The kids and I were out the door by 7:30 a.m. Sunday morning and arrived in Oaks on time.  I knew it was going to be a great day when I was greeted by Ron and Helene Horn who were timing the event.  I have to say that anything they are involved with has a special flavor to it.  Who doesn’t know what I mean by that???  Adding to my excitement was a great friend Martin who was there with his wife Sue and their two children.  Martin is 6’7” and let me just say that the kids take after him size-wise so he certainly had his work cut out for him. 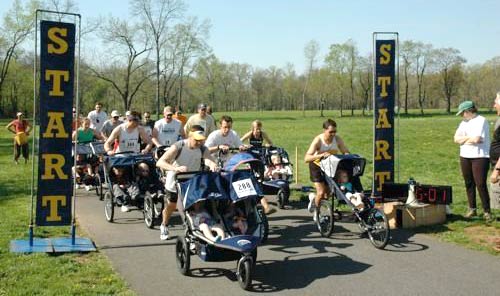 The start of the Strollers

The course was a 5K (1 ½ mile out and back) along the Perkiomen Trail and started in waves.  To put this into perspective, just imagine the starting line:  a pack of runners lined up with dogs followed by a group of runners with small kids and babies, all standing around in the heat anxious to get moving…  It was awesome!  The run started in staggered waves with the headphone runners first, followed by the dog runners, followed lastly by the baby runners..  I am not sure how many people participated but am certain that anyone that did had a great time.  To my delight there was a reasonably sized hill just prior to the turnaround.  Our finishing time.. Who cares about that..  The kids and I celebrated post race by pouring water over our heads to stay cool and eating cookies, bananas, and cliff kiddie fruit rolls (a first for us)… Sorry Julie..

After our celebrations ended and the crowds departed, I stood in the parking lot dripping wet with the kids in wet diapers, no shoes, clothes, bottles and food everywhere wondering what the hell I was going to do to pack up and get home, let alone use the restroom myself.  As if the timing weren’t perfect, my daughter looks to me and says in a laughing demeanor, “Again Dada.”  I then realized that it didn’t matter how or when we got home because for me, this is what life was all about.. 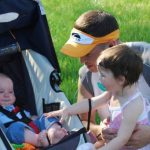 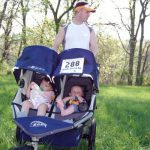 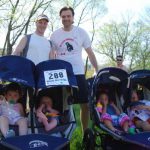 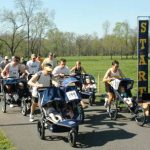 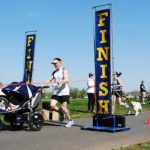 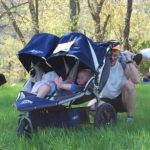 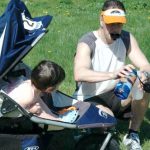 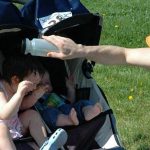 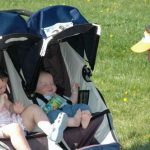 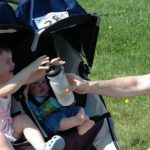 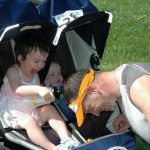